BrokerNotes.co is committed to the highest ethical standards and reviews services independently. Learn How We Make Money
Home navigate_next Guides

At present, cryptocurrencies cannot normally be exchanged directly for physical goods. However, times are changing as companies such as Square Inc. announcing that its popular Cash App will allow Bitcoin to be bought and sold from a user's balance. Additionally, some online merchants like NewEgg will also accept Bitcoin as a payment method.

On a side note, a popular benefit of cryptocurrencies is that they are free from manipulation by governments and central banks. Arguably, due to the increased popularity and lack of regulatory oversight of these currencies, some countries, such as Russia, China, Bolivia, Ecuador, Columbia and Vietnam have placed restrictions on their use or trading by locals.


What are Cryptocurrency Pairs and Crypto Crosses?

When newly issued cryptocurrencies are modelled on Bitcoin, perhaps with some changes or improvements, they are called altcoins. A popular example of an altcoin is Litecoin, which was one of the first cryptocurrencies issued after Bitcoin.

Influences on the Value of Cryptocurrencies and Crypto Crosses

The market exchange rate of cryptocurrency and crypto cross pairs can fluctuate substantially, as the perceived relative values of the currencies involved fluctuate up and down.

Factors that influence the crypto markets include relevant news, as well as varying supply and demand factors. Also, both currencies in a particular currency pair can result in valuation shifts. Thus, if the U.S. dollar was appreciating sharply in the currency market, perhaps due to an increase in U.S. employment numbers, then this may reduce the cost of the various cryptocurrencies in U.S. dollar terms.

Another important valuation factor for cryptocurrencies is their usability, in other words, the ability to spend the digital coins on actual goods. For example, if another major retailer announced that they were planning on accepting payments in Bitcoin, then the relative value of Bitcoin would tend to rise substantially versus the dollar.

Examining the ranking of cryptocurrency pairs and crypto crosses in their trading volume on a particular day, such as the table below, it's clear that pairs containing actively traded coins with smaller denominations tend to rank higher. This is because the relatively lower price of the "smaller" cryptocurrencies means that a larger volume of trading on an average day can take place. 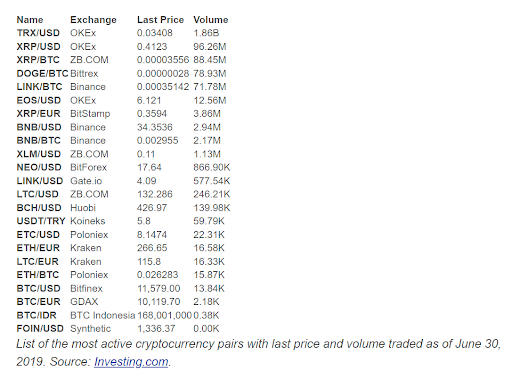 In comparison to the previous ranking of trading volume, the table below ranks the top 13 cryptocurrencies by their price per coin or token, their market capitalisation and their daily volume traded on June 27, 2019. All of the amounts listed are expressed in U.S. dollars. 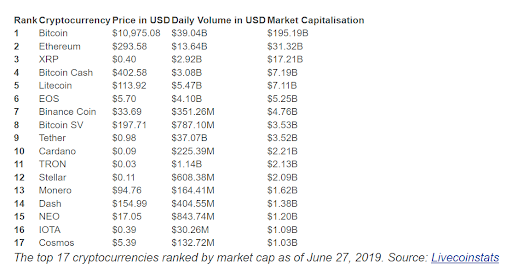 In the table image above it's clear that Bitcoin is the highest performer. With a price per coin of US $10,975.08, a market capitalisation of $195.19 billion and a daily traded volume of $39.04 billion, Bitcoin is far ahead of its nearest fellow cryptocurrencies.

In fact, as of June 27, 2019, second place Ethereum was recording numbers less than a third of those achieved by Bitcoin, with $293.58, $31.32 billion and $13.64 billion respectively. However, it's important to bear in mind, that these figures don't represent the overall, or recent, trends in each cryptocurrencies performance, and each will fall and rise in turn based on short term market fluctuations.

How to trade Cryptocurrency Pairs

For a full guide to everything cryptocurrency related, including finding the right broker and exchange for you, make sure to check out the BrokerNotes Ultimate Guide to Cryptocurrencies.

There is a very high degree of risk involved in trading securities. With respect to margin-based foreign exchange trading, off-exchange derivatives, and cryptocurrencies, there is considerable exposure to risk, including but not limited to, leverage, creditworthiness, limited regulatory protection and market volatility that may substantially affect the price, or liquidity of a currency or related instrument. It should not be assumed that the methods, techniques, or indicators presented in these products will be profitable, or that they will not result in losses. Learn more.